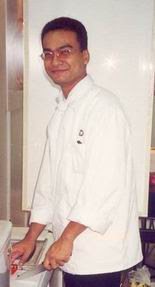 He has also won several awards and has participated in cooking demonstrations and exhibitions in Singapore , Japan , Australia and China .

Chef Khai specializes in French, Western and Asian cuisines having worked in hotels in many countries around the world. He enjoys sharing his culinary experience and culinary skills at his classes and values feedback from his students. He has previously given private cooking classes to small groups who share his passion for cooking.

Come and join Chef Khai’s “Back to Basics”, “Light & Healthy” or “Thai Cooking Series" classes and learn the basics of cutting, cooking and preparing healthy dishes turning them into culinary works of art.
Posted by At Nineteen Culinary Studio at 11:53 PM